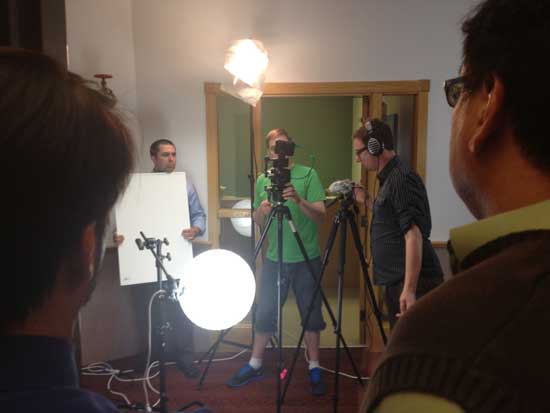 We took over a small office in SF on Saturday 5/4 to film 9 scenes and whopping 14 setups.
It was a long day but we got a lot of great little scenes.
Eric and Eve and Tim stopped by to play some office workers in the elevator, and Tim got to play the part of the elevator doors. Eric took a bunch of great pic while he was there – thanks honey.
What a great way to round out our first week.

It has been pretty amazing going around the city to so many locations. Everyone has been so nice and helpful – we’ve been having a great time – well, except when we have our little freakouts about the enomity of the task.
We are 1/4 of the way through and I couldn’t be happier with the scenes that we’ve filmed so far.

All of the actors have been amazing, too. Especially Charlie Ballard, who has been with us every day and is on the schedule for every remeining day of production. Charlie, we could not be making the film without you, and I am so excited to be able to work with you for another three weeks!