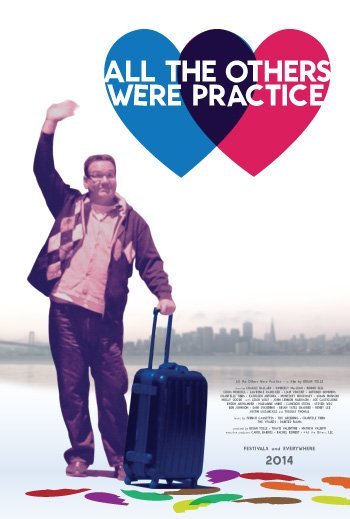 In 2009 I decided to take some story ideas that Jon and I had been playing with, and use them as the basis for a script. I wanted to write a script that I could film on a small budget but one that didn’t feel like the typical three-people-in-a-room independent film. My other goal was to write a queer film that didn’t rely on the standard tropes of queer cinema. I wanted a film that wouldn’t have a picture of shirtless guys on the poster.

The first draft was finished in about two months, and over the next year and a half, it was revised and workshopped and polished into the filming script. I kept trying to reduce the number of roles, but every character seemed to be justifying their place, even if they were only in one scene. A few characters got combined and some single lines turned into glances, but the final filming script had twenty-five speaking roles.

By early 2011 we held auditions to find the core actors for the ensemble and started to plan a fall filming schedule. We vastly underestimated how hard it would be to raise the budget for filming. Our savings were small, crowd-funding is over saturated and wealthy investors didn’t seem to be clamoring at the chance to spend their cash reserves on an unknown director with an unknown cast. Fall 2011 came and went and we were still trying to figure out how to raise a bit more than a hundred-thousand dollars to film with a small crew. We had calculated the bare minimum crew would be about five people on set every day.

2012 found us following a series of promising but ultimately fruitless leads. There were grants and donors and investors, and none of them panned out. So we were faced with a question – can we film for less money? We needed the actors, the equipment, the locations. We scaled back props and wardrobe, made sequences less complicated. The only place left we might cut was the crew. If we couldn’t afford them, did that mean we couldn’t film? Even the most enthusiastic supporter would be pressed to carve out six weeks to volunteer on a film.

So we asked a different question – what would filming look like if we didn’t have a crew?

I had filmed short films before with me as the only crew member. It was a juggle, and it was only for a few days. Could I do it for a feature? Having no crew would put certain limitations on what we could film. There could be no camera moves, no focus pulls, no lighting of large rooms — because we wouldn’t have any crew to physically operate the equipment. We couldn’t get just a single crew member – a cinematographer needs gaffers to move the lights. Having less crew also meant that we would have less gear, because there would be no crew to move it. If we had no crew members we could cut all the production costs associated with them. We didn’t have to organize parking or trailers or transportation, and food costs were slashed for every filming day. But could we actually make a movie with no crew?

What we came up with was a filming budget that was very similar to the one we’d tried for two years to produce, except it had no paid crew positions. The other main difference was that we could afford to produce it. The budget was whittled down to cover only what was in front of the camera.

By the spring of 2013 we had found two adventurous small investors and a few credit cards and there was a plan in place for filming. It worked out cheaper to buy our equipment, so we bought a camera and as many lights as we could carry in two trips. Remarkably nearly all of the original cast remained intact from the 2011 auditions, Travis came on board to Produce the production phase, and we were off.

The production was scheduled for six weeks starting April 25, 2013. For most of our locations, I would see them for the first time on the day of filming, so I couldn’t plan too much blocking. I sketched a series of storyboards before each filming day and we would use those to communicate to the cast what were filming. We also used these sketches to plan the day, and as we X’d out each panel, we would know what was filmed and what was missed. It was a very stressful filming period, but with determination and sheer will we pulled it off. The busiest days we had a few extra crew members to help keep things moving, but for at least half of the filming it was just myself, Travis and the actors.

There were a few schedule shuffles because our office and cafeteria locations kept falling through. We ended up taking two weeks off and coming back to film for three days. We couldn’t find a suitable (cheap) office, so we built our own cubicle on a stage. All of the cubicle scenes were filmed in two days. The cafeteria scenes almost didn’t happen, we ended up filming them all in a single long day – our last day of filming – on June 15.

We went directly into post production. At eleven months, the post period was longer than I’d hoped, but there was much to do. We had a few hiccups, but overall the post phase has gone smoothly. We had a lot of in-progress screenings and the edit was locked at the end of January 2014. The sound and picture have been cleaned up, and the All the Others Were Practice is finished.

This afternoon, we have a cast and crew screening to kick off the next phase of the film – getting it out into the world so you can watch it!